This pumpkin chowder is a great recipe to make for a cozy Sunday afternoon. It would even be perfect to help warm up after a long night of trick-or treating!

I absolutely love to use pureed pumpkin. Just the stuff you can find in a can in the grocery store. It’s so versatile and filled with fiber, potassium and lots of good nutrients. Plus, it’s October now so it’s officially pumpkin season! You don’t have to just use it for sweet recipes, it’s also great in savory dishes!

The way to start a base for any soup is to make a simple mirepoix, which is just a fancy term for celery, carrots and onions that are cooked down. Doing this adds a nice background flavor to soups, stews, braises, etc. You do this by chopping the vegetables and cooking them in olive oil with a little salt (helps to release the juices) and pepper. Those then go straight into the crockpot to start this chowder. Mirepoix is a foundation, similar to a roux when making a cream sauce.

I decided to add two full cans of pumpkin puree to this chowder because it really added a nice thickness. For the creaminess, I added the original flavor of Nutpods, which is marketed as a dairy-free coffee creamer made from coconut cream and almonds. Their original flavor doesn’t have any added sweetener so it’s perfect for coffee or your savory dishes!

Some other spices I added into this soup are sage and cinnamon which really enhance all those fall flavors. Sage adds a nice earthy tone; think Thanksgiving stuffing/dressing. And the cinnamon really brings out the pumpkin flavor. I promise it doesn’t make it taste like pumpkin pie soup.

My husband is my taste tester and he was kind of “meh” when I told him I was planning to make this because his mind immediately went to sweet pumpkin flavor. He is the savory lover in the family, I’m the sweet lover! He actually really loved it (and ate leftover for lunch that week) and didn’t think it tasted sweet at all.

For protein, I added some Aidell’s chicken and apple sausage – could those flavors go any better with pumpkin chowder?? You could also add shredded chicken! Of course, you don’t have to add meat if you are making this vegan.

This recipe does make quite a bit of soup, so it’s perfect for a crowd or to freeze for another day! 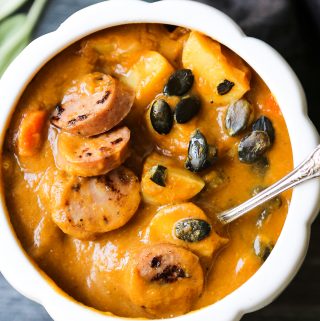 This is a hearty and warm chowder filled with all the flavors of fall. Autumn in a bowl. It is naturally gluten-free and paleo/Whole30 with the option to make it vegan!
Prep Time30 mins
Cook Time4 hrs
Course: Main Dish, Soup
Cuisine: Dairy-Free, Gluten-Free, Grain-Free, Paleo, Whole 30
Servings: 10
Pin Recipe

For The Rest Of The Soup

Here are some other pumpkin recipes I think you’ll love!

Click on the photo below to PIN this recipe!