When did it all begin? Well, Celiac Disease is a genetic autoimmune disease, so I know it has been laying dormant my whole life. I have never really had any digestive problems, like ever, so what triggered it to flare up and become the monster that took over my body? Was it the stress and pain of my mom’s death in 2012? Was it my pregnancies in 2013 and 2015? They were easy pregnancies and births, but it takes a huge toll on your body to grow another human being. I had Mono in college. Could that have set my immune system into a downward spiral? No one really knows.

When did I realize something might be really wrong?

One major and chronic symptom that I had was the pregnancy heartburn with my son, Jack, that didn’t go away after his birth in February 2016. I attributed it to breastfeeding hormones, stress, not eating well, not enough sleep. It was so bad that I could barely even take one sip of wine without having horrible heartburn for the rest of the night. I was definitely a TUMS addict! I tried all the other over-the-counter remedies as well and those were all temporary fixes – nothing worked.

I’m going to be honest and real here so TMI ahead! It’s important for me to be real because I hope I am able to help others by maybe identifying their symptoms as the same as mine.

My issues slowly turned into chronic, daily diarrhea. And it was only in the morning which was so weird. I would say I was having these issues for 8 months or so, and maybe 4 of those months were really bad. And by bad I mean that I would need to run to the bathroom multiple times most mornings until I was basically emptied out. Shout out to my awesome husband who loves me no matter what. 😉 I again attributed it to stress, not enough sleep, and just needing so badly to have a “break” from life and just relax.

In January 2017, I finally decided this was not going away on it’s own and I needed to see a doctor. I visited with a primary care nurse practitioner and she was great! She ordered some blood tests to check my thyroid levels, white blood counts and inflammatory markers to make sure there wasn’t an infection happening, or something else like Crohn’s or Ulcerative Colitis. We also did some stool samples (I know, gross) to rule out C-Diff.  We decided to do a 30-day probiotic trial and come back to see her after that. I was also keeping a food diary to see if I could identify any food triggers. This proved to be useless since I wasn’t having the typical symptoms of bloating, cramping, diarrhea, vomiting, etc. that starts soon after the food is ingested. It was all happening the next morning.

There were even a couple of nights where I had beer and pizza for dinner and I woke up in the middle of the night so sick that I vomited. HELLO – my body couldn’t process all that gluten!!! I still didn’t put it all together.

The vacation from hell:

I ended up not going back to see my provider right away after I finished my probiotics because I had a Caribbean Cruise with my husband and friends at the end of February. We had this planned for 9 months and I was so excited for an adults-only getaway.

The morning of our trip arrived and I felt like I was hit by a bus. I felt so horrible. We decided to cancel our flight that morning and reschedule later in the day. I slept most of the day and ate only macaroni and cheese (gluten) and pretzels (gluten) and ginger ale. I was so worried that it was some sort of weird stomach bug that I ate bread (gluten) and crackers (gluten) for the whole trip. That wasn’t a good idea!! Things were so bad that I had to miss one of our excursions in Grand Cayman because I couldn’t leave the bathroom. I decided I finally needed to go down to the medical facility on our ship because I couldn’t take it anymore. As soon as I did that they put me on 24 room confinement. Poor me! Digestive issues ruined my vacation!!

My symptoms continued when we got home, of course. I was Googling and self-diagnosing myself with every disease known to man – that’s how I work. There were a few things that happened that finally pushed me over the edge to go back to the doctor to really figure out what the heck was going on with me: 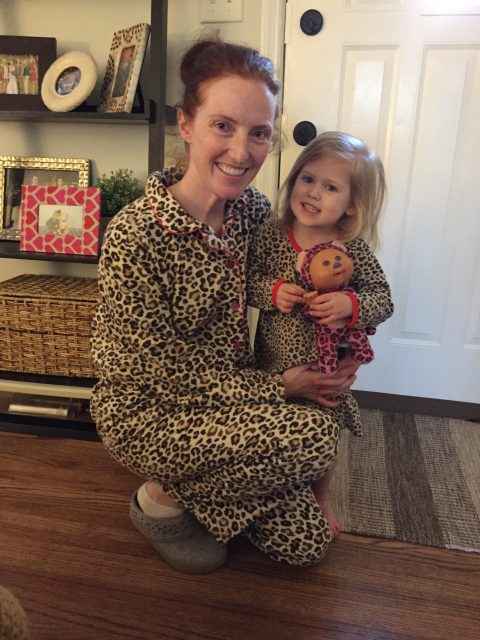 A few days before diagnosis – I feel like I was skin and bones.

Back to the doctor I went. We did some more stool sample tests to rule out icky infections and scheduled a colonoscopy. My provider looked at me and said, “I’m going to test you for Celiac. I don’t think that’s what it is, but we’ll rule it out.” Thank goodness I didn’t have any major infections, but sure enough the blood test that looks for Celiac Disease antibodies came back positive. I’m so thankful she tested for it.

Next step was an upper endoscopy (procedure where they put a camera down your throat to view your esophagus, stomach and small intestine). During the endoscopy they take biopsies of the lining of the small intestine to look for damage to the villi in the small intestine – villi are the tiny finger-like projections that help absorb nutrients. I had the endoscopy done on a Friday afternoon. He basically told me that it looked like I had “celiac sprue” from what he could see on the camera.  I got a call from the surgeon on Monday morning that my biopsies showed moderate to severe damage to the lining of my small intestine. It was confirmed that I had Celiac Disease. So begins my journey to live a life where food will take over my life and literally heal my body. 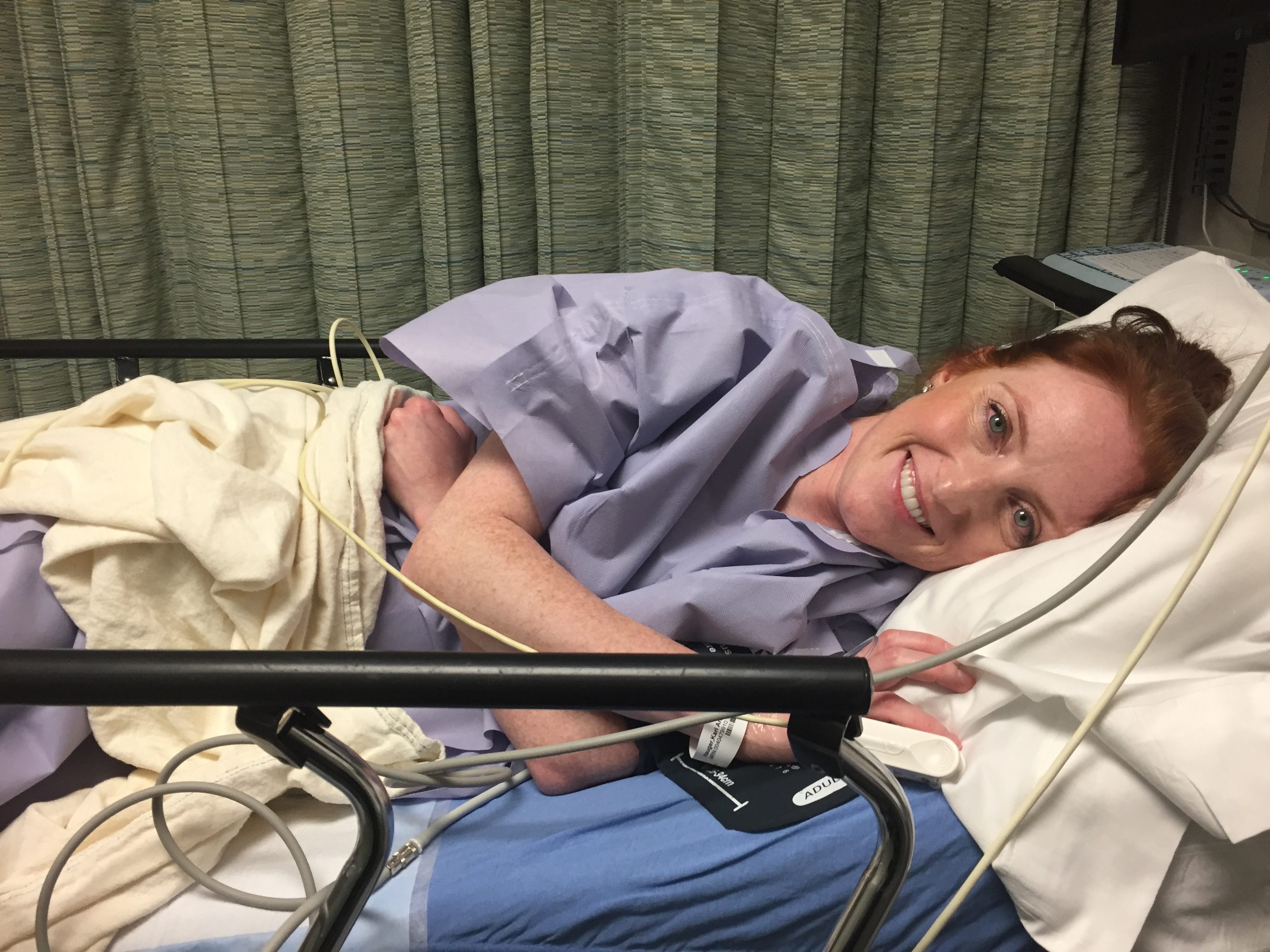 Me post-endoscopy. The procedure was easy and painless. I was conscious, but not coherent. The scope was down for only 3 minutes total and medicine was administered for only 5 minutes. I was nervous, but it wasn’t bad at all.

I was not given much information about Celiac Disease and how to care for myself so I dove into Google and the world of Instagram to learn from the real experts – those living with it.  After doing more research, and looking back, I was actually having more symptoms that I didn’t think much about. There can be over 200 symptoms and most people have a whole myriad of things going on.

You’re probably wondering why in the world I would share all of this personal (and embarrassing) information. Well, it’s the truth. This is what happens to your body when you have a disease in your small intestine. I am sharing this to give an idea about what might happen if you have Celiac Disease. I also want this to be a way for me to document my journey and watch my own progress. Some days are “fun” learning all this new stuff and some days I feel really down in the dumps about the restrictions in my life.

I have found so much support in social media platforms, and “met” other wonderful Celiacs from all over the world. I’ve learned that I CAN DO THIS! It’s hard for sure, but it’s the only way for me to stay healthy and thrive. I literally have no other choice.

Take a look around my site. One of the reasons I created this little corner of the website is because I wanted to share my travel, recipes, and gluten-free experiences. Please don’t hesitate to ask me any questions at any time. I want to share my journey and help others!

I’d Love to Hear from You!