I am going to start this post by saying that I don’t expect restaurants to drop what they’re doing because I walk in with Celiac Disease. I understand that not all restaurants can offer gluten-free items or a safe kitchen. And that’s why I don’t go those restaurants. But, oh man, I was so disappointed in my experience at Barrio in downtown St. Paul. My dinner there ended up being one scoop of guacamole, a baggie of chips I brought from home, raw veggies and a margarita. That was all that I felt comfortable eating (and basically the only things I was offered). I went here with my sisters and my aunt before we went to the Bruno Mars concert. I don’t get many nights out on the town so I was a little bummed that this was how it started.

The menu denotes “gluten friendly” items and I researched beforehand for other reviews. I also read that they fry their chips in a shared fryer so they would be contaminated. That’s why I brought my own chips. After reading reviews, I felt comfortable enough that I would be able to find something to eat there. I looked over the menu when I arrived and thought a shrimp and quinoa dish sounded safe. Our server, Amber, was very nice and said that she understood that Celiac was serious and would talk with the kitchen and her manager. Amber said that she asked her manager to come over multiple times, but she never came. In the end I was basically told that they were not able to accommodate me and didn’t even want to try.  At least they were being honest. I was told there  was “flour in the air” in the kitchen and they couldn’t guarantee that anything would be safe enough for me to eat. I was offered a plate of raw veggies.

My one sister commented that I was handling it very well. I really tried to not let it get to me because like I said above I can’t expect the world to stop for me because I can’t eat gluten. Thank goodness I brought my bag of chips from home! 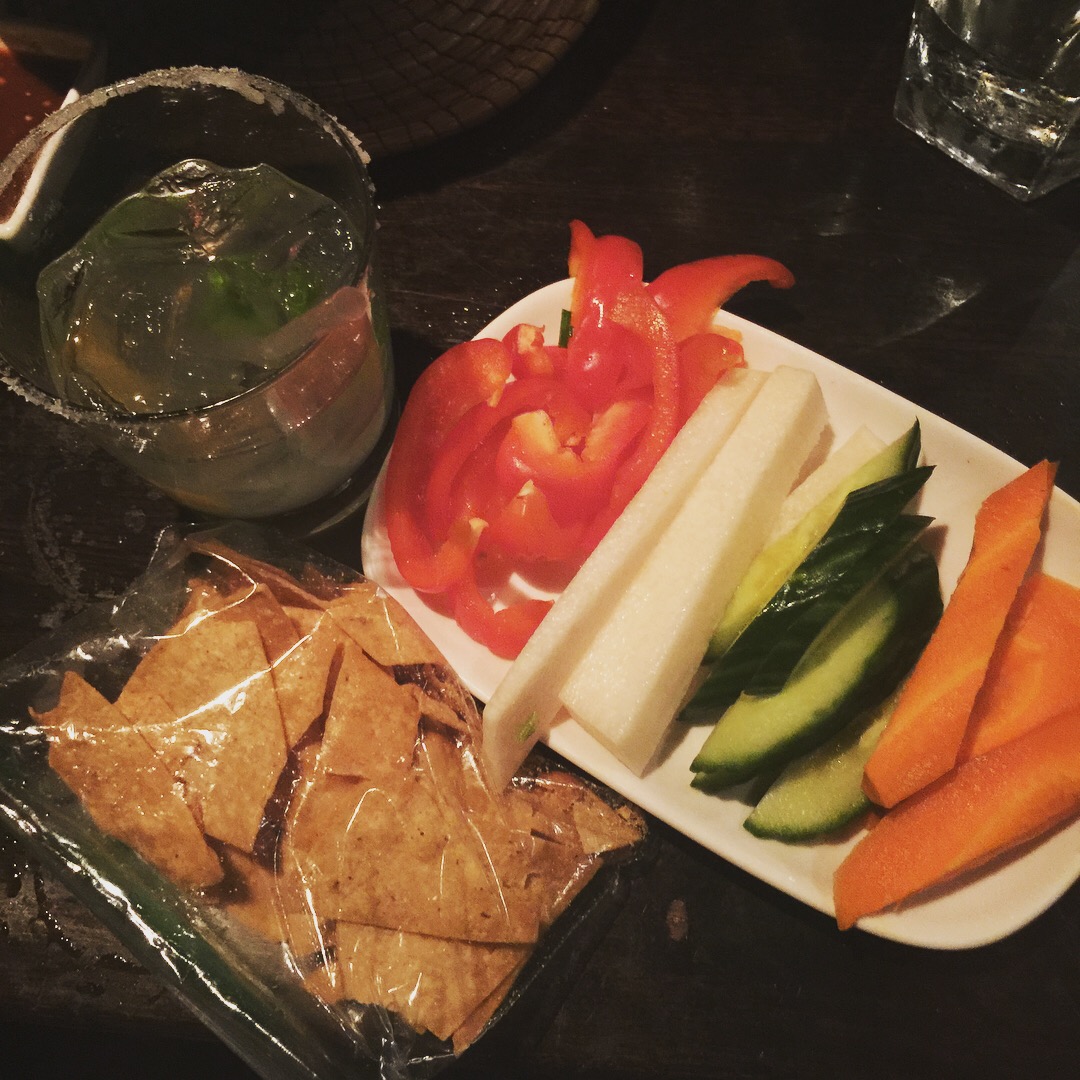 My meal at Barrio in Lowertown St. Paul.

The only pass that I will give them is that it was a busy Saturday night. I do feel that good customer service would have included the manager coming over and maybe offering for someone in the kitchen to handle my meal a little more carefully (like changing into new gloves, using disposable tinfoil or something to cook on, making sure that it is as gluten-free as possible). Just like they do at other restaurants that are not 100% gluten-free. Most are at least somewhat helpful. They just didn’t want to try to help me. I won’t be back to any of the locations here in Minneapolis/St. Paul. I think they should just remove the notation of “gluten-friendly” options from their menu.

I absolutely would NOT recommend this restaurant for Celiac diners.

And I will end this post saying that I have had nothing but great dining experiences for every other restaurants I’ve walked into, especially here in the Twin Cities. There are so many other great establishments where I can find better food with a more welcoming environment.